A lineup of iconic Star Wars characters will be featured in a series of brand new animated shorts from Hasbro.

The Star Wars Kids YouTube channel will be the home for three new videos featuring toys from Hasbro’s Mission Fleet figures and vehicle line. The new adventures aim to teach kids valuable lessons while introducing them to the new, smaller-scale Mission Fleet collection. The first short entitled, Even A Mandalorian Needs Help features Din Djarin, Grogu aka Baby Yoda, and a surprise guest who helps lend a hand.

The next two shorts will be released on YouTube in the coming weeks and feature more fan-favorite characters and vehicles. The titles themselves, Don’t Get Cocky Kid and It’s Not Wise To Let Your Guard Down are a tease on their own as to who may appear.

The Star Wars Mission Fleet collection debuted last fall and contributed to 70% growth in the Star Wars brand for Hasbro last year. On a recent earnings call, Hasbro CEO Brian Goldner noted that the success of Star Wars products last year was notable for happening in the first year without a theatrical Star Wars release since 2014. 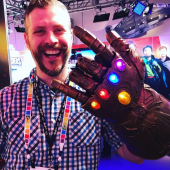 Rocco Marrongelli is an Editorial Intern at Adventure Publishing Group. He shares news and reviews of pop culture and the latest toy trends on the Toy Insider and the Pop Insider. He has many passions involving the ’80s, such as collecting vintage action figures, watching cartoons while eating cereal straight from the box, and will always play Nintendo until the day he dies. Rocco is a huge Disney Parks fan and claims Thunder Mountain is honestly the best mountain ride in all the land. He also owns 172 Funko Pops! and doesn’t plan to stop, and yes, he’s opened every single one of them. You can follow @RoccoSupreme on all your favorite social platforms.