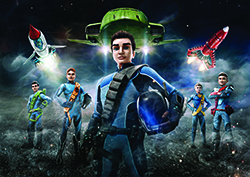 As ITV Studios Global Entertainment continues to build upon the international reach of its new boys’ property Thunderbirds Are Go, the firm has shared details of the brand’s success so far in Australia and New Zealand.

Since its debut in April on Nine Network’s Go! channel in Australia, Thunderbirds Are Go has consistently drawn large audiences, with each episode attracting more than 200,000 viewers. In New Zealand, following the outstanding ratings for the first 13 episodes, TVNZ began airing the show on Saturday mornings at 7.20am on TV2 from July 11, 2015.

The Thunderbirds Are Go licensing program is off to a strong start with Planet Fun and HeadStart distributing Vivid Imagination’s master toy line across both territories this summer. In August, publishing products will also be launched into both markets with Hachette unveiling three books inspired by the series, including an official guide book, a sticker activity book, and a Crosscut Book at all major book retailers.